For nearly eight years, Saudi Arabia, the United Arab Emirates, the Internationally Recognized Government of Yemen, the Ansar Allah (Houthi) armed group, and other warring parties have failed to provide reparations to civilian victims of their frequent, serious international-law violations in Yemen, according to a new report. U.N. member states should take immediate steps to support reparative justice in Yemen, according to the joint report, “Returned to Zero”: The Case for Reparations to Civilians in Yemen, released on June 28 by Mwatana for Human Rights and the Allard K. Lowenstein International Human Rights Clinic at Yale Law School.

“Returned to Zero” is the first detailed study of the right of civilians to receive reparations and of the international legal obligations of state members of the Saudi/UAE-led Coalition, the Internationally Recognized Government of Yemen, and the Ansar Allah (Houthi) armed group to provide those reparations. The 170-page report examines the most significant mechanisms that warring parties have established to respond to civilian harm their forces caused during the nearly decade-long, ongoing armed conflict in Yemen. The report finds that existing, warring-party mechanisms are grossly inadequate — both in relation to the scale and severity of the harm done to civilians in Yemen and to the international legal obligations that warring parties hold. 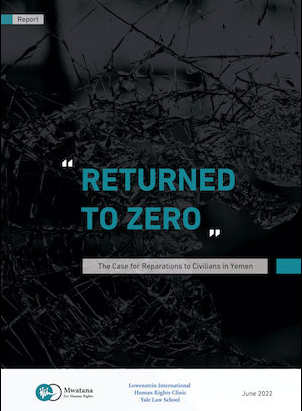 “The warring parties have failed civilians twice — first, with the direct and indirect damage they have done to civilians during this awful war and, second, with their glaring failure to provide reparations to the civilians they have harmed,” said Radhya Almutawakel, the Chairperson of Mwatana for Human Rights. “Reparations, along with criminal accountability, are not a luxury, but a necessity to end the cycle of violence and grievances in Yemen.”

The Saudi/UAE-led Coalition, the Internationally Recognized Government of Yemen, and the Ansar Allah (Houthi) armed group have repeatedly and publicly promised to provide some form of assistance or redress to civilian victims of their abuses. Warring-party promises have, so far, outpaced any actual assistance provided to civilians, the report demonstrates. In 2020, 2021 and 2022, civilians interviewed by Mwatana said that warring parties in Yemen were more likely to repeat their wrongs than to remedy them.

Warring parties in Yemen have not entirely ignored civilian harm for which they are responsible. The Saudi/UAE-led Coalition and Internationally Recognized Government of Yemen have made limited condolence payments to civilian victims of airstrikes, and the Ansar Allah (Houthi) armed group has set up committees to hear complaints against members of the group.

Even where warring parties made efforts to respond to civilian harm, these responses were grossly inadequate, the report finds. The Saudi/UAE-led Coalition and Internationally Recognized Government of Yemen have made condolence payments to only a tiny fraction of civilian victims of Coalition airstrikes. These condolence payments were framed as “voluntary” and “humanitarian.” They came without an apology. The payment process — which followed investigations the report found not independent, impartial or credible — was nontransparent, ineffective, and far from thorough, the report shows. Some civilians had to sign a receipt that said they had received payment for a Coalition “mistake.”

Ansar Allah’s redress committees operate entirely non-transparently and lack independence and impartiality. In most cases, those who made petitions to the Ansar Allah committees told Mwatana that they received no form of ascertainable assistance at all. Others were exposed to risk and reprisals, the report finds.

“Returned to Zero” is the product of many years of research. The report’s authors reviewed public statements, reports, and documents produced by the warring parties and the bodies they established to respond to civilian harm. Between May 2020 and January 2022, Mwatana conducted 81 reparations-focused interviews with civilian victims, their family members, and human rights lawyers, with a focus on those who had been promised or who had sought some form of assistance or reparation from warring parties. The Lowenstein Clinic conducted international legal research, drafted the report, and analyzed the warring parties’ civilian-harm responses in Yemen, based on Mwatana’s investigations.

Many of the civilians interviewed for the report described direct and indirect physical, social, psychological, and economic costs they bore as a result of warring party attacks. Without assistance or reparations, civilians have struggled to get back on their feet.

After an airstrike killed her husband, four sons, daughter-in-law and grandson and destroyed her home, “Noria” (a pseudonym) explained, “Nothing was left for us except the clothes that we were wearing.” She found a temporary place to live but could not afford it. “I am tired of being evicted by people because I can’t pay rent,” she said.

“Salma” (a pseudonym), whose 14-year-old son lost both his legs in a landmine explosion, said, “Our suffering started with landmines since 2015, and our suffering continues until now. We can no longer cultivate, herd or log wood.” Ansar Allah planted the mines.

International law violations by the warring parties in Yemen have caused, and continue to cause, civilian harm on an enormous scale. Individuals who have suffered gross violations of international human rights law and serious violations of international humanitarian law have a right to a remedy, including reparation. Reparations are meant to restore the injured party, as far as possible, to their position before the wrong occurred. They are a form of justice. In Yemen, no warring party has made reparations to the civilian victims of their violations, the report concludes.

In interviews with Mwatana, harmed civilians expressed a variety of priorities for justice. Some mentioned full monetary compensation, while others preferred an international court to try perpetrators. Still others wanted revenge. Over and over, civilian victims said that those who were responsible for the wrongs should provide the reparation.

In an effort to support the realization of civilians’ right to reparation in Yemen, “Returned to Zero” makes recommendations to the warring parties, to other states, to U.N. bodies, and to global civil society.

The report calls on the U.N. Security Council to refer the situation in Yemen to the International Criminal Court and to establish an international reparations mechanism for Yemen. Because the U.N. Security Council has, so far, “abysmally” failed to take appropriate action to ensure accountability for grave international law violations in Yemen, according to the report, the report also calls on the UN Human Rights Council or the UN General Assembly to take immediate steps to facilitate accountability for Yemen. Such steps should include creating an international criminally focused investigative mechanism and calling on warring parties to meet their reparations obligations to civilians in Yemen.

“Failing to provide reparations is choosing to impose the costs of war on civilians,” said Kristine Beckerle ’15, Cover-Lowenstein Fellow with the Allard K. Lowenstein International Human Rights Clinic at Yale Law School. “Reparations have so far been neglected by the warring parties in Yemen and under-prioritized by those with influence, including other states. States with the power to support reparative justice in Yemen should not keep asking civilians to wait.”

Since 2016, Yemen and Coalition officials have repeatedly promised to provide assistance to civilian victims of airstrikes. In its first set of findings, the Coalition’s investigative body, the Joint Incidents Assessment Team (JIAT), recommended that the Coalition provide “compensation” to civilians affected by an airstrike. JIAT made similar recommendations in 2016, 2017 and 2018. By 2018, victims of the relevant airstrikes said they had received nothing, not even a phone call.

In August 2018, immediately before the U.N. Human Rights Council was set to begin its annual discussion of Yemen, the Saudi/UAE-led Coalition and Internationally Recognized Government of Yemen announced a new joint committee to distribute “voluntary aid” to victims of Coalition airstrikes in Yemen. In June 2019, the Coalition and Internationally Recognized Government of Yemen said the “voluntary aid” committee had provided condolence payments to civilian victims of six airstrikes. By June 2019, Mwatana, other human rights groups, and U.N. experts had reported on hundreds of Coalition airstrikes, many of which appeared unlawful, that had caused significant civilian harm.

For this report, Mwatana interviewed dozens of civilians who lost family members, were injured, or had property damaged or destroyed in 20 airstrikes for which JIAT  recommended the Coalition provide some sort of assistance. As of 2021, based on Mwatana’s research, the Coalition and Internationally Recognized Government of Yemen had made condolence payments in only four of these 20 attacks. Some civilians who lost family members, had been wounded, or had suffered property damage in these airstrikes received smaller amounts than government documents said they were meant to receive. Others received no payment at all. In all cases, payments came without an apology or acknowledgment of fault.

The Ansar Allah (Houthi) armed group has created redress-related bodies, most notably, the Authority to Lift Injustice and the Redress Committee. Both bodies were publicly tasked with hearing complaints against Ansar Allah members and petitions for assistance and redress.

Mwatana interviewed 16 civilians and human rights lawyers who interacted with these Ansar Allah redress-related bodies. All of them sought assistance in cases of abusive detention or disappearances. In most cases, they received no ascertainable assistance. Mwatana conducted 16 additional reparations-related interviews with civilians harmed by Ansar Allah. None had received redress.

One lawyer said, “Although the committee is called the Redress Committee, we did not find redress from it except for those who have personal power against them. Redress is only for people with power.” Another lawyer offered, “All we received back [from the Redress Committee] were promises that never happened. … It was like the previous committees.”

A few days after Ansar Allah started a deadly fire in an overcrowded migrant detention facility in Sana’a that killed and wounded scores of people, Ansar Allah promised to investigate and compensate those harmed. Instead, Ansar Allah attacked migrants protesting about the fire. “Ifa” (a pseudonym), who was injured in the fire, said, “They don’t treat us as humans, all of them. That is why we don’t expect reparations from them.”

Under international law, reparations should endeavor to restore, to the greatest extent possible, the injured party to their situation before the violation. Reparations may take one or several forms, including restitution, compensation, rehabilitation, satisfaction, and guarantees of non-repetition. Full, adequate and effective reparation may require a combination of several forms and should be promptly delivered and proportional to the gravity of the violation and the harm suffered.

Restitution is an attempt to restore the victim to their situation before the violation. Restitution might not always be possible, particularly for wrongs that are irreparable, as are many in Yemen. Compensation involves financial payment, which should cover any economically assessable damage. Rehabilitation involves measures aimed at mending the harm that a victim suffered, for example, the provision of medical, psychological, legal and social services. Satisfaction encompasses a variety of actions designed to address injuries that are not financially assessable, such as rights to truth, recognition and remembrance. Guarantees of non-repetition involve appropriate measures to ensure that the unlawful action will not repeat.

Modern developments in international law suggest that individuals may seek reparation directly from the actor responsible for the international wrong, which may be a state, a non-state armed group or an individual, as well as through their own state or through a mechanism created by the international community, for example, an international claims commission. The state in whose territory the violation occurred — in this case, Yemen — has an obligation to help individuals realize their right to reparation.

The obligation to provide reparation does not replace or negate other aspects of states’ obligations to ensure accountability for serious international law violations, including the obligations to investigate alleged violations of international humanitarian law and international human rights law and to prosecute alleged perpetrators of war crimes. The prosecution obligation is not subject to negotiation or waiver. Amnesties for war crimes, for example, are prohibited. In some cases, judicial and administrative sanctions against persons responsible for violations may be a crucial component of reparations.

Scrivi a: redazione@agenparl.eu per inviare i tuoi comunicati stampa.