Talking to the Taliban ‘only way forward’ in Afghanistan 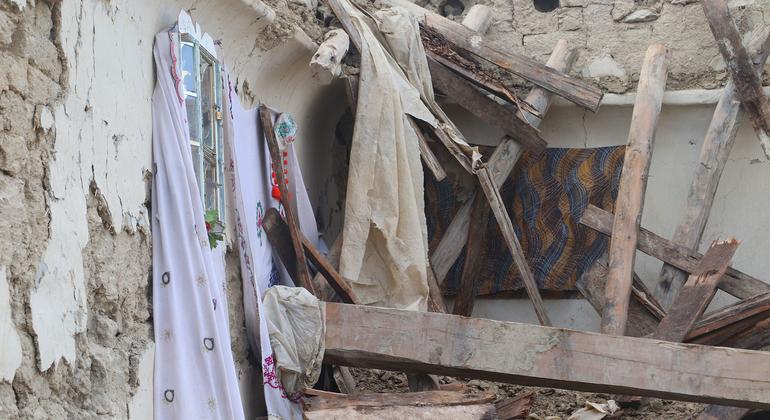 Ambassadors stood and observed a minute of silence for the victims of the disaster before being briefed by Ramiz Alakbarov, Deputy Special Representative at the UN’s Mission in Afghanistan, UNAMA, and Martin Griffiths, the UN Humanitarian Coordinator.

Mr. Alakbarov provided an update on the earthquake, citing latest figures which revealed nearly 800 confirmed deaths and more than 4,000 injured, before turning to the ongoing human rights, economic and humanitarian challenges the country is facing.

Despite difficulties, he said “we firmly continue to believe that a strategy of continued engagement and dialogue remains to be the only way forward for the sake of the Afghan people, as well as for the sake of regional and international security.”

Despite the adoption of a general amnesty, and repeated assurances by Taliban leaders that it is being respected, UNAMA continues to receive credible allegations of killings, ill-treatment and other violations targeting individuals associated with the former government.

Credible allegations of violations against persons accused of affiliation with the National Resistance Front and the ISIL-KP terrorist organisation have also been reported.

“The de facto authorities have increasingly restricted the exercise of basic human rights, such as freedom of peaceful assembly, freedom of opinion and expression, quelling dissent and restricting civic space in the country,” he said.

Furthermore, restrictions particularly target women and girls, such as the ban on secondary schooling for girls, and the decree ordering women to wear face coverings.

“The costs to the economy of these policies is immense,” he said. “The psychosocial costs of being denied education, for example, are incalculable, and women are collectively being written out of society in a way that is unique in the world.”

The economic crisis is perhaps the single most important issue in Afghanistan, and a potential driver of conflict and misery. It is estimated the economy contracted by up to 40 per cent since August.

Unemployment could reach 40 per cent this year, up from 13 per cent in 2021, while the official poverty rate could climb as high as 97 per cent.

“If the economy is not able to recover and grow meaningfully and sustainably, then the Afghan people will face repeated humanitarian crises; potentially spurring mass migration and making conditions ripe for radicalization and renewed armed conflict,” he warned.

Mr. Alakbarov stressed the need to prioritize rural areas, with focus on agricultural and food systems to prevent hunger. This will also help to reduce child labour, improve health outcomes, and create the environment that will enable social development and change.

“It will also pave the way for substitution agriculture to replace the poppy cultivation, allowing us to capitalize on the de facto authority’s recent ban on poppy and narcotic cultivation,” he said.

“While doing so we need to continue to provide adequate attention to clearance of widely unexploded ordinance of war. This bottom-up approach to economic recovery is shared by the de facto authorities and would help the most vulnerable.”

On the political front, Mr. Alakbarov reported that the Taliban continues to hold power almost exclusively, and the emergence and persistence of an armed opposition is largely due to political exclusion.

Armed opposition attacks against the de facto authorities doubled in May, compared to the previous month. Although the number of ISIL-KP terrorist attacks has generally decreased, their geographic scope has widened from six to 11 provinces.

“We cannot exclude the possibility of increased instability if peoples’ rights are denied and if they do not see themselves in their government,” he said.

In the coming month, the UN will seek to promote political consultation and inclusion, and engagement with the de facto authorities will continue.

“Even as the international community and the Taliban remain far apart” on the question of human rights, specifically for women – and political rights, “there are some areas where we can do better to improve the lives of Afghans, as well as advance on issues of common concern such as counter-narcotics and mine action.”

Addressing humanitarian response, Mr. Alakbarov highlighted how aid partners have reached some 20 million Afghans between January and April this year alone, including nearly 250,000 returnees and some 95,000 people affected by floods and weather-related events.

However, the humanitarian crisis persists, and sustained support will be needed through the coming year.

Update from GOV.UK for: Our commitment to a sustainable solution to the conflict and humanitarian crisis in Syria: UK Statement at UN Security Council