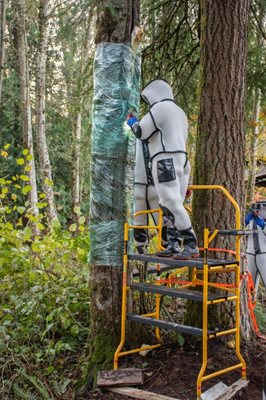 BLAINE – Washington State Department of Agriculture (WSDA) entomologists successfully eradicated an Asian giant hornet nest by vacuuming the hornets out of the nest Saturday, Oct. 24, just two days after finding the nest in a tree on private property in Blaine, Wash.

In all, the entomologists with WSDA’s Pest Program removed 98 worker hornets. During the early morning extraction, 85 hornets were vacuumed out of the nest and collected another 13 live hornets were collected with a net while observing the nest on Friday.

“The eradication went very smoothly, even though our original plan had to be adapted due to the fact that the nest was in a tree, rather than the ground,” managing entomologist Sven Spichiger said. “While this is certainly a morale boost, this is only the start of our work to hopefully prevent the Asian giant hornet from gaining a foothold in the Pacific Northwest. We suspect there may be more nests in Whatcom County.”

Saturday’s operation began at about 5:30 a.m. with the team donning protective suits and setting up scaffolding around the tree so they could reach the opening of the nest, which was about ten feet high. The team stuffed dense foam padding into a crevice above and below the nest entrance and wrapped the tree with cellophane, leaving just a single opening. This is where the team inserted a vacuum hose to remove the hornets from the nest. 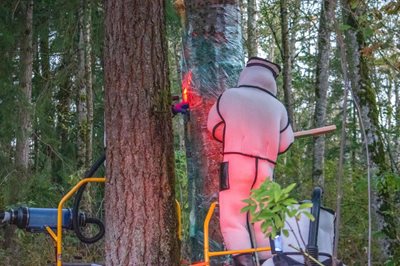 The work proceeded slowly at first, with very few hornets emerging. The team members used a wooden board and some smart whacks against the tree to encourage more hornets to leave the nest. This proved successful. When the hornets stopped coming out of the nest, the team pumped carbon dioxide into the tree to kill or anaesthetize any remaining hornets. They then sealed the tree with spray foam, wrapped it again with cellophane, and finally placed traps nearby to catch any potential survivors or hornets who may have been away during the operation and return to the tree. The work was completed by 9 a.m.

“This weekend’s successful operation is due in large part to the careful planning and hard work of our Pest Program team,” WSDA director Derek Sandison said. “I also want thank the landowners, all those who have reported Asian giant hornet sightings to us, and the citizen scientists who set traps, as well as staff with the U.S. Department of Agriculture, Washington State University, and the University of Washington who have assisted in these efforts.” 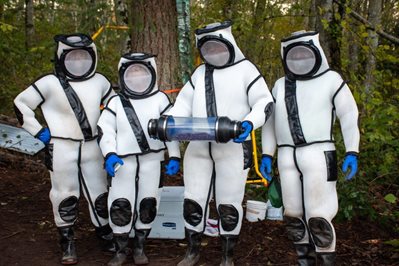 “We congratulate the Washington State Department of Agriculture for eradicating this nest,” said Osama El-Lissy, Deputy Administrator of the U.S. Department of Agriculture’s Plant Protection and Quarantine program. “Thanks to their expertise and innovation, this nest is no longer a threat to honey bees in the area. We are also pleased that the radio tags we provided worked so well, allowing state entomologists to tag and track a live Asian giant hornet back to the nest. It’s a strong example of our close cooperation in combatting this pest.”

In the coming week, the WSDA Pest Program intends to cut the tree down and open it to see how big the nest was. The entomologists also want to determine whether the nest had begun to produce new queens or not.

WSDA will continue setting traps through at least November in hopes of catching any more Asian giant hornets still in Whatcom County and potentially locating any other active nests.

The public still has an important role to play in detecting Asian giant hornets in Washington. The nest removed Saturday was found thanks to a report made by a member of the public in September. Every report of an Asian giant hornet leads the agency closer to finding a nest. It remains critical for the public to report every hornet they see each time they see one. Reports of sightings in Washington state can be made online at agr.wa.gov/hornets, via email at <a or by calling 1-800-443-6684. 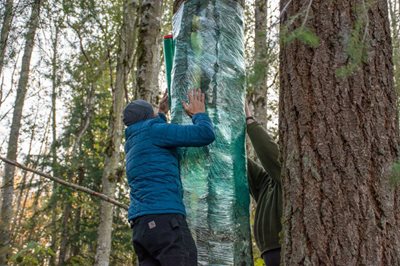 Using a network of traps, some set by WSDA staff and hundreds more placed by citizen scientists and other cooperators throughout the state, the entomologists have been diligently tracking sightings of the Asian giant hornet in an ongoing effort to find nests and eliminate them.

Asian giant hornets, an invasive pest not native to the U.S., are the world’s largest hornet and a predator of honey bees and other insects. A small group of Asian giant hornets can kill an entire honey bee hive in a matter of hours.

Visit agr.wa.gov/hornets to learn more about Asian giant hornets and the state’s trapping and eradication project.

Participation in the press conference is only open to members of the press. Pre-registration is required to attend. Unfortunately, registration is only available via a desktop computer; you cannot register on a mobile device.

PLEASE REGISTER AT LEAST ONE HOUR IN ADVANCE TO ENSURE YOUR REGISTRATION IS APPROVED PRIOR TO THE START OF THE PRESS CONFERENCE.

Members of the press: Register to attend the virtual press conference

Photos of the eradication are available to the members of the press. Please contact Elaine Thompson directly at <a to request photos.

WSDA photos/videos will be uploaded by 1 p.m. Pacific on Oct. 26. at the links below.

Here is a link to other high-resolution photos that may be used more by others, including some eradication photos. Please credit the Washington State Department of Agriculture unless otherwise noted in the image file name. https://agriculture.box.com/s/uvk3gf2ri1v005almojwkxewpoh55h4w

Here is a link to videos of Asian giant hornets and WSDA activities. Please note that some of these photos may only legally be used by official members of the media as they are provided to WSDA solely for use by the news media. Please credit the Washington State Department of Agriculture unless otherwise noted in the image file name. https://agriculture.box.com/s/0ocwyhkzapumd7myp0incwisr96dz5i6