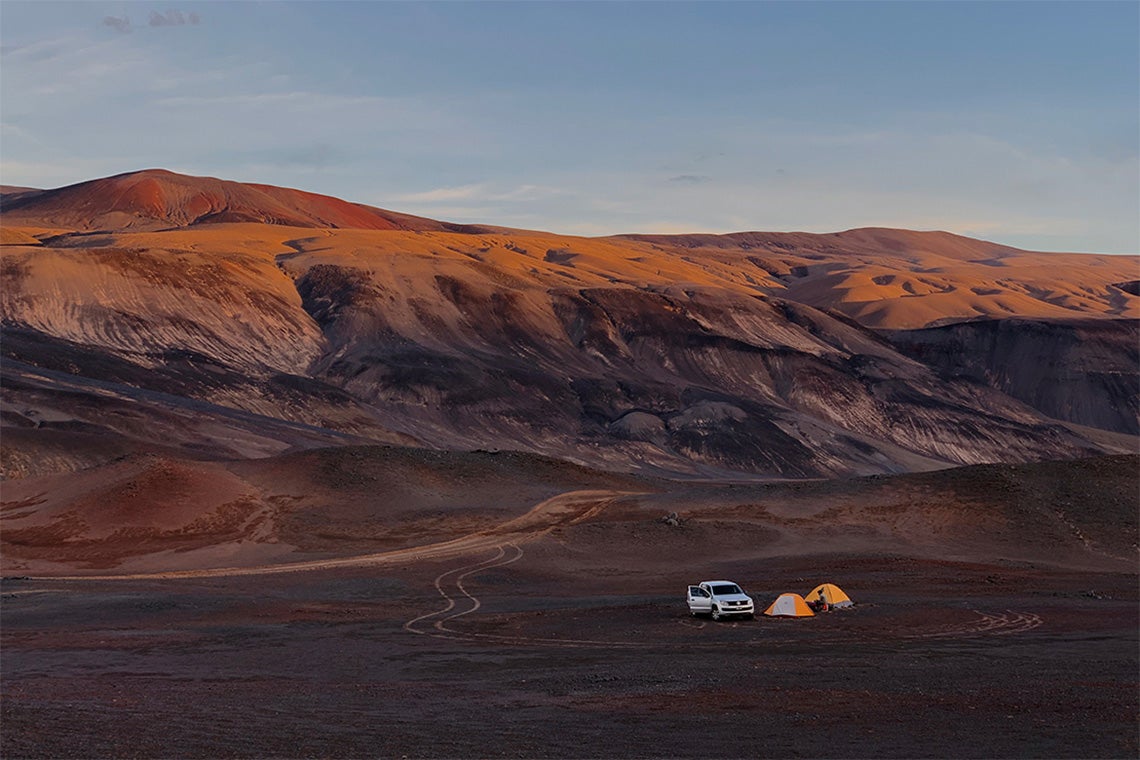 Researchers at the University of Toronto Mississauga have unearthed new information detailing how powerful winds shape the landscape in a remote part of the Andes mountain range.

PhD student Mitchell McMillan, a tectonic geomorphologist, and Lindsay Schoenbohm, an associate professor of chemical and physical sciences, study how tectonic forces like earthquakes and volcanic eruptions interact with climatic forces like wind and water to build up the earth’s landscape or wear it away. Their recent study of the Andes site, published in the Journal of Geophysical Research: Earth Surface, contradicts previously held theories and provides a better understanding of long-term climate-related erosion in other windswept places, including the surface of Mars.

Working in Schoenbohm’s lab, McMillan was poring over satellite imagery, searching for interesting landforms to investigate, when he spotted images of the Salina del Fraile, a small depression in the landscape in northwest Argentina.

“I noticed a strange looking landform that I wasn’t able to understand at first,” says McMillan, adding he was curious to know more about what formed the shallow depression in the red earth of the Puna Plateau.

The 420-square-kilometre Salina del Fraile basin dips down about two kilometres below the surface of the plateau, where the Mars-like desert surface is covered in small, closely packed red pebbles swept clean by the ceaseless winds gusting from the northwest.

Geologists had previously theorized that the Salina del Fraile basin was formed when a fault shifted the surface of the plateau, but few had actually visited the remote site that is nearly a two-day drive from the nearest city.

“It’s exciting to see something that only a few – if any – geologists have looked at before,” McMillan says. “To go there to investigate and collect data and try to figure it out is a lot of fun.”

McMillan and Schoenbohm hypothesized that the basin could have been created by a fault or by water erosion. Over several trips to the field site, they traversed the basin by foot, but were surprised to find no evidence to support either theory.

“The shape of the depression is almost exactly what you would expect if it was faulted down,” McMillan says. “We expected to find faults, but it definitely wasn’t out there.”

There was no evidence of erosion from rivers or glaciers either, prompting the researchers to conclude that another force had shaped the basin.

“We had to take the wind idea more seriously,” McMillan says.

“It’s exciting to see something that only a few – if any – geologists have looked at before,” McMillan says (photo by Mitchell McMillan)

McMillan described the summer winds on the Puna Plateau as relentless. “It’s something between annoying and oppressive,” he says. “It’s a constant loud noise in your ears.” The gusts from the northwest pelt the researchers with pebbles and can cause sandstorms strong enough to crack the windshield of a truck.

With that in mind, the researchers looked to the interaction between the wind and the unique geology of the Puna Plateau.

Millions of years ago, the tectonic shifts that created the Andes mountains also folded the upper crust of the plateau, bringing to the surface a layer of fine-grained rock that erodes easily in the wind.

“We think that folding led to the scouring of this large depression,” says McMillan.

The winds from the northwest sandblasted the rock, gradually scooping out the basin in a process that began between 17 and eight million years ago.

McMillan and Schoenbohm looked to a line of white volcanic ash that rings the Salina del Fraile about 100 metres above the modern-day bottom of the basin, which provides a marker that helps the research team date the beginning and progression of the erosion.

“There was some erosion, then the ash was laid down (as the result of a volcanic eruption), then there was more erosion after that,” McMillan says. “It tells us that a significant amount of erosion had occurred by then.”

Today, the bottom of the basin lies nearly two kilometres below the surface of the plateau, and is eroding at a rate of between 0.06 to 0.23 millimetres per year.

“Most of the surfaces are what we call ‘desert pavement,’” McMillan says. “There isn’t much loose sand around. It’s little pebbles and stones closely packed together. When that happens, the wind can blow faster because there’s nothing to stop it.”

There are other signs of the wind at work in the basin, including yardangs and megaripples – small hills and other sinuous small landforms carved out of the bedrock by wind blowing from a single direction over millions of years.

The team’s findings may also help scientists better understand how wind forms the landscape at other remote and windy locations.

“Mars has some of the best examples of wind erosion that we can observe,” McMillan says. “It’s extremely arid and totally dominated by the wind on the surface.”

McMillan sees telltale signs of wind erosion on Mars landmarks like the Gale Crater and Mount Sharp, and evidence of mega yardangs and landforms similar to those found in the Salina del Fraile.

“This shows that we need to look at how wind erosion interacts with tectonic processes to get a full understanding of what’s going on,” he says.

The research was supported by the Natural Sciences and Engineering Research Council of Canada.

BETTER, BUT FAR FROM OVER: U OF T EXPERTS SHARE THEIR COVID-19 OUTLOOKS FOR THE YEAR AHEAD

SYNOPSIS: WHERE CHAMPAGNE GETS ITS SOUND