SYNOPSIS: WHERE CHAMPAGNE GETS ITS SOUND

Researchers have uncovered the specific mechanisms that produce champagne’s crackle.

Hold a glass of champagne to your ear, and you will hear a gentle hissing sound, which comes from tiny bubbles bursting at the liquid’s surface. But what mechanisms produce the properties of the sound we hear—such as its frequency spectrum? Juliette Pierre and colleagues at Sorbonne University in France now have an answer, finding that it comes from vibrations of the bubble cavity that are triggered by the bursting process [1]. While the result certainly has a fun aspect, the finding could allow scientists to use sound recordings to infer the volume of gas a bubble evacuates when it pops, the researchers say.

The team studied bubbles bursting on the surface of both a soapy-water solution and of champagne contained in a glass. To capture the process, they recorded the sound emanating from the liquid with a microphone while simultaneously filming the motion of the bubbles with a high-speed camera.

Analyzing the data, Pierre and colleagues find—as expected—that the production of the sound coincides with the rupture of the bubble. As the bubble nears the surface, the pressure of the gas inside it increases. This pressure is violently released when the bubble bursts.

The bubble, however, doesn’t immediately disappear. The part of the bubble that is still submerged generates acoustic vibrations of the liquid-gas interface. The frequency of this vibration depends on the volume of gas the bubble contains and on the diameter of the hole in the bubble. As a result, the frequency changes as the rupture grows and the bubble shrinks, increasing in pitch until the bubble dies. For the small micrometer-sized champagne bubbles, only the beginning of the rupture is audible to humans, while for larger millimeter-sized bubbles, the whole burst can be heard.

Katherine Wright is a Senior Editor for Physics.

A Vortex in an Egg Cell

During a fruit-fly egg cell’s early development, its internal fluid begins to swirl in a vortex—a transition caused by the coordinated behavior of elastic filaments in the cell. Read More » 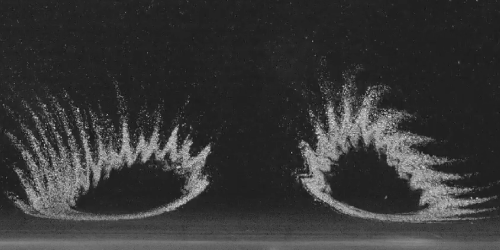 VIEWPOINT: TRACKING A SINGLE ION IN AN ULTRACOLD GAS

MINDFULNESS IN SOUND : TUNE INTO THE WORLD AROUND US