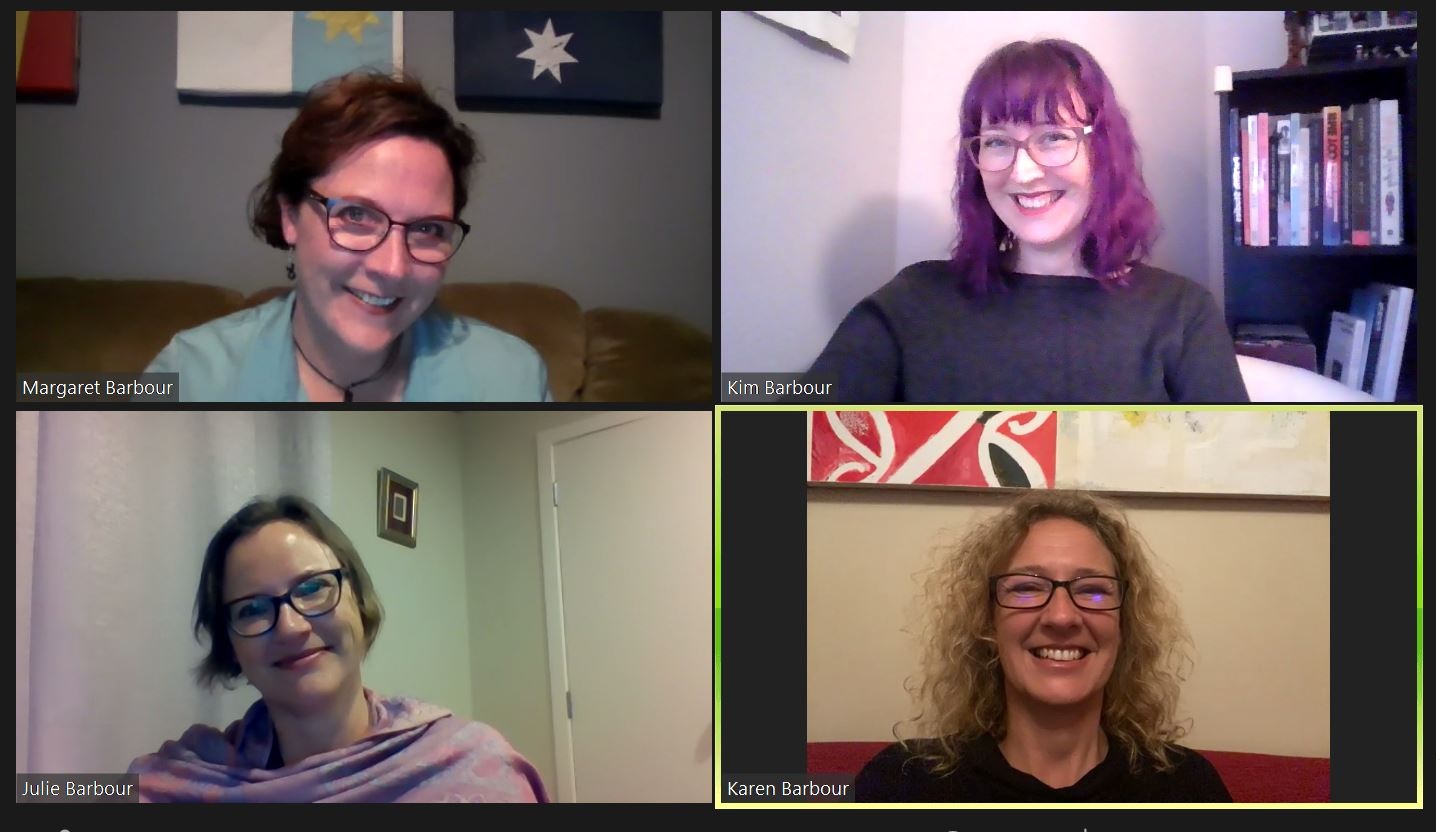 Despite four very different academic disciplines between them, the Barbour sisters all agree on one thing – the importance of education and the critical role a university has in the community in which it stands.

For the Barbour sisters, there was no question they would attend the University of Waikato. Growing up in Piopio in rural King Country before moving to Hamilton in the 1990s, the sisters watched their dad, Robert, complete his PhD while working in the computer science department, while Grandad Bob had been scientific glassblower and supervisor of laboratory services in Science.

Each sister knew Waikato was where they would go to study, it was just a question of what.

Learning and expression through dance

For eldest sister Karen, having grown up doing gymnastics with her sisters and contemporary dance from the age of 11, an interest in exploring learning through movement took hold at a young age.

She completed a Bachelor and Master of Social Sciences in philosophy at Waikato, before moving to Auckland to study contemporary dance at Unitec, reading up on feminist theory in her spare time. After travelling and dancing overseas, Karen returned to Waikato.

“I wanted more from dance, and I felt there was an opportunity to explore embodied ways of knowing through creative practice, particularly through a feminist lens. There were some radical thinkers at Waikato in the field of learning and movement at the time, so I knew researching movement a deeper level would be possible there,” she says.

Since finishing her PhD in 2002 – Karen has fostered dance in the Waikato region through her university and community work. She established dance as a minor within the Bachelor of Arts, set up a charitable dance trust and promotes the importance of dance as a medium for critical thinking, collaboration, and the capacity to engage with the world. Now an associate professor in the School of Arts, Karen was the first person in New Zealand to complete a PhD in dance – forging the pathway for others to do the same.

Margaret, the scientist of the bunch, says her early view of academic study was very different to her sisters’.

Right from primary school and an early introduction to the scientific method from a teacher, at eight years old Margaret knew she wanted to be a scientist. “I wanted to understand how the natural world worked and find out things no one else had,” she says.

Now Dean of Science at the University of Waikato, Margaret completed a bachelor and master of science in biology and earth sciences at Waikato, followed by a PhD in plant physiology at The Australian National University. With former roles as associate dean of research, and professor of plant physiology at the University of Sydney, Margaret is an internationally recognised expert in plant-environment interactions. She returned to Waikato in 2019 as Dean of Science.

While scientific research is about finding absolute truths in a controlled environment, Margaret says she’s opened up over the years to a more multi-disciplinary approach, influenced by discussions with her sisters. “I’ve learned that recognising the biases individuals bring to a research project is important to the outcome. In the Anthropocene, scientific discoveries won’t have a positive impact on the world if we don’t also consider what makes humans tick.”

The importance of language, field work, and sharing what you know

In lectures she listened to the stories of Ray Harlow and the late Terry Crowley, both former linguistics professors. She recalls their passion for language, and particularly Crowley’s adventures in the field, documenting languages in remote Oceanic villages.

After finishing a Bachelor of Arts at Waikato, and Masters at Auckland University, Julie completed her doctoral research at Waikato on the Neverver language, a language spoken in the Malekula region of Vanuatu. Now a senior lecturer in linguistics, Julie has well and truly caught the field work bug, and continues to focus her research on Malekula’s languages.

While early in her research Julie was focused on gaining academic understandings, now she’s working to make sure she gives the knowledge she’s gained back to the community. “I believe our most important function as a university is to serve our community, so it’s really important to me that I share what I’ve learned with those I learned it from.”

For youngest sister Kim, studying at Waikato was a chance to subvert her initial career choice and pursue a path less followed.

Initially intent on a corporate career in PR, Kim discovered arts marketing while studying communications at Waikato, switching her focus from the corporate side of communications to the creative, with a focus on media studies.

She says the breadth of her undergraduate studies at Waikato afforded her the ability to think broadly about communications and its potential applications, particularly for creatives and artists. “My undergraduate degree was immensely rich in the fact I was able to dip my toes into lots of different areas, and that has allowed me to build a career today that didn’t really exist 20 years ago.”

Kim completed a Master of Arts at Waikato, followed by a PhD at Deakin University in Melbourne. In 2015 she started lecturing in media at the University of Adelaide, and was recently appointed a senior lecturer. Her research interests lie in identity performance on digital and social media, and often focuses on artists or other creative practitioners.

WHAT DOES THE ARCHAEOLOGICAL RECORD REVEAL ABOUT THE HUMAN EXPERIENCE OF PAST EPIDEMICS?