Today, June 30, 2020, University of Louisiana Monroe President Nick J. Bruno, Ph.D.,
and First Lady Linda, leave those titles behind as they end an almost 10-year chapter
of their lives and begin a new one in retirement. 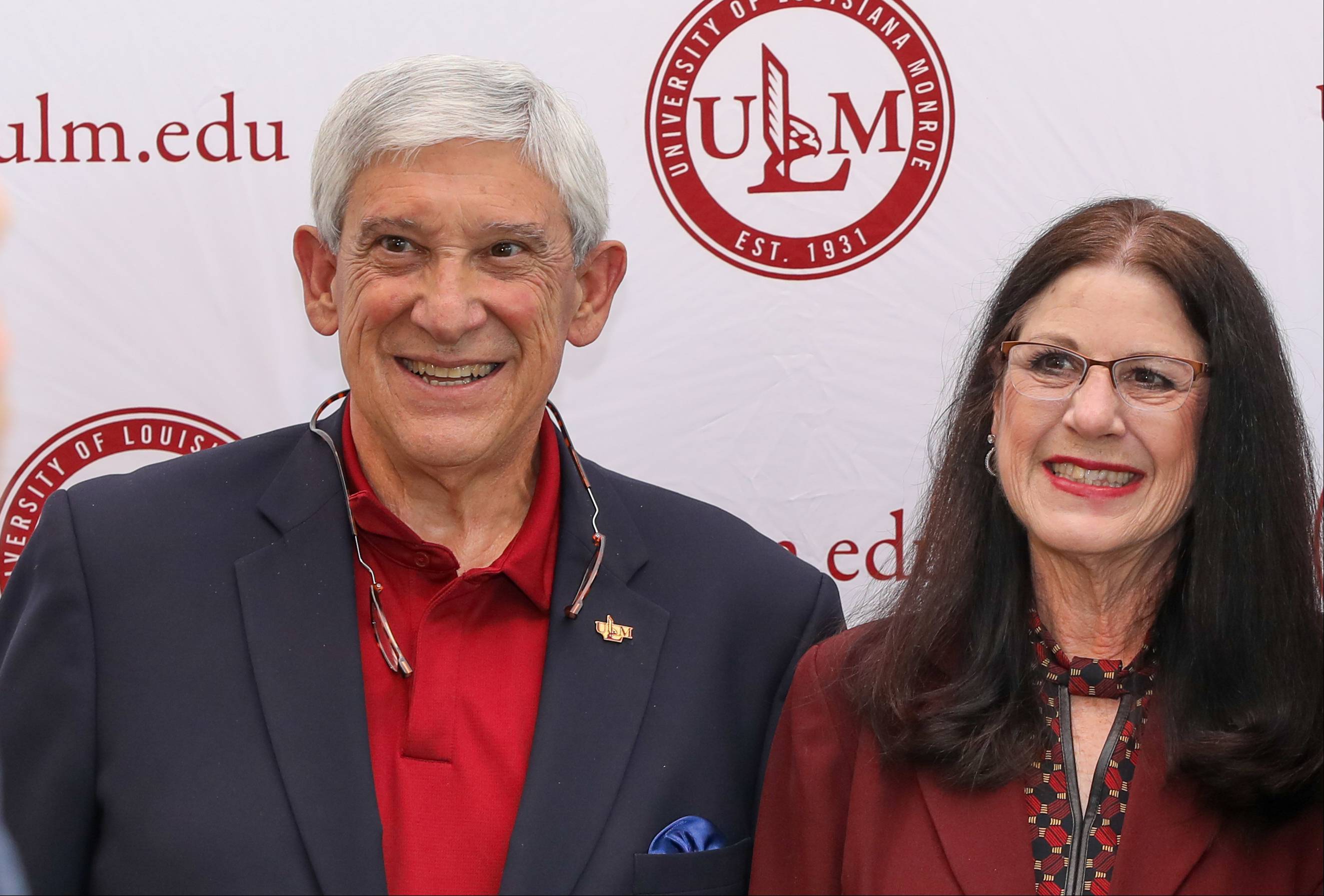 PHOTO: President Nick J. Bruno, Ph.D., and First Lady Linda Bruno at a retirement reception
at Bayou Pointe on June 16. The Brunos were the official ambassadors for the university
and served generously in the community for almost 10 years.

When Bruno announced he was retiring after the 2020 spring semester, he did not know
that the most challenging days at ULM lay before him.

In early January, Bruno told his executive committee his last official act would be
May 16, 2020, when he would confer diplomas on the largest class in ULM’s history
– 1,023 graduates.

By mid-February, the United States was warning residents of a fast-moving, crippling
and sometimes deadly illness striking citizens young and old. The coronavirus, also
called COVID-19, was claiming lives around the globe. On Feb. 28, more than 2,000
miles away from Monroe, La., in Washington State, the first COVID-19 death in the
U.S. was reported, according to the Centers for Disease Control.

“At that time, there were many unknowns and questions about COVID-19, it’s potential
to spread, how to treat it, and how to stop it,” Bruno said. “Among the first places
identified for the likelihood of infection to spread were schools and universities.
By early March, universities in the UL System knew we must make major changes and
make them quickly.”

At ULM, the first change was suspending face-to-face classes and moving all classes
online. The second was implementing the CDC’s social distancing and limiting the number
of people at gatherings on campus. From the Oval Office to the state Capitol orders
came swiftly and directly, setting off a domino effect that would forever change not
only life at ULM, but everywhere else, too.

ULM spring events were canceled, athletics suspended, employees began working from
home, students were asked to move out of campus residences if they could, and finally,
the campus was closed to the public on March 25.

Following Gov. John Bel Edwards’ phased reopening of the state, in late May and early
June, some employees returned to campus. New guidelines for face masks, sanitization,
and social distancing were in place.

“There were so many factors to consider in safely bringing students, faculty, and
staff back to campus,” said Bruno. “Dr. Litloff and the executive staff, directors,
and managers are doing an excellent job preparing to welcome everyone back in the
fall.”

A group of Bruno’s friends, who call themselves the Warhawk Coffee Club, established
the Nick J. Bruno Endowed Scholarship in recognition of the retiring president. Friends
supported the scholarship with a $25,000 endowment to the ULM Foundation.

The scholarship is for deserving full-time students pursuing an undergraduate degree.
The recipients must meet ULM admission requirements and maintain a 2.5 GPA.

“I am deeply touched by this scholarship established by my coffee-drinking buddies
and friends. Nothing could honor me more than knowing more students will receive the
help needed to earn their college degree at ULM.” he said.

A retirement reception for Bruno was held June 16 at Bayou Pointe, with ULM masks
for guests available at the door. Friends and colleagues came to wish the president
and Mrs. Bruno well and thank them for years of serving the university and the community.

Projects and completions under Dr. Bruno

After a 45-year career in higher education in Louisiana, Bruno stated in a Jan. 16,
2020, press release that the programs and projects in ULM’s future would take “several
years of coordination and commitment to be realized,” and he could not commit to remaining
in his position to see those projects to completion.”

Since being appointed by the UL System as the eighth president of the university,
projects and completions have defined Bruno’s presidency. He began that role on Nov.
8, 2010.

Bruno returned to ULM with a vision of taking the university beyond the geographic
confines of Northeast Louisiana. He envisioned ULM on the national stage as an institution
with dynamic research and offering more programs in the health sciences. He saw the
university as an institution of higher education, providing multiple degree programs
in high-paying, high-demand fields – the STEM majors of science, technology, engineering,
and mathematics.

Under his leadership, in 2016, ULM was elevated from a regional to a national university
by receiving the Carnegie R3 Doctoral University classification and recognition by
U.S. News & World Report as a Best National University, both for the first time in
its then-85-year history.

Among Bruno’s most significant accomplishments at ULM – and there are many – was securing
the partnership with the Edward Via College of Osteopathic Medicine (VCOM) to build
a medical school on the ULM campus. Where a groundbreaking ceremony was held in September
2018, today stands a $38 million-plus, 100,000 square-foot, four-story medical school.
The first class of students will begin in 2020.

The benefits of a medical school are many, and one of the largest is the economic
impact. VCOM’s direct and indirect economic impact during the two-year start-up period
is expected to exceed $60 million. By 2025, the economic impact of VCOM will grow
to $78.9 million as graduates of the college begin practicing medicine in the region
and state.

During Bruno’s administration, facilities were added, expanded, and renovated. To
name a few:

The ULM Foundation’s SOAR Campaign started in 2013 with a goal of $55.4 million. When
the campaign closed at the end of FY 2018, that goal was exceeded with a total of
more than $56 million. It was the first capital campaign in ULM’s history.

Campus beautification, enhanced technology in the classroom, and access for students,
plus expanded campus housing, have been continuous under Bruno.

Serving the campus and the community

Bruno’s presidency was more than a job. For him and Linda, it was their lives. Service
to the community and the university has been their priority for nearly a decade.

The Brunos hosted student groups at dinners to celebrate achievements – such as the
ULM Water Ski Team for bringing home another national championship. They opened their
Bon Aire home to honor outstanding faculty members and served employees holiday meals
at the Student Union Building. Dr. and Mrs. Bruno greeted guests at the President’s
Suite in Malone Stadium for Warhawks football on Saturday nights. They were consistent
attendees at most university events.

Bruno was honored for his outstanding service in February 2020 with the Monroe Chamber
of Commerce’s highest honor, the Rambin-Silverstein Memorial Civic Award. The Rambin-Silverstein
Memorial Civic Award recognizes a resident of Northeast Louisiana who has demonstrated
achievement, leadership, and service for the benefit of the greater community.

“I am deeply, truly honored for the Rambin-Silverstein Memorial Civic Award,” said
Bruno. “I am humbled to receive such an honor from my peers and colleagues in this
wonderful community.”

Looking back and looking forward

Bruno is retrospective about his years leading the university.

“Many great things were accomplished due to the many amazing people I’ve had the pleasure
of working with over the years. Nothing is done in a vacuum. No one person can do
anything. It is only together that projects are conceived, planned, and then executed.”

“I have been surrounded by people who shared a vision for the university. Whether
faculty or staff, each brought their experience and expertise and added those talents
to benefit ULM as a whole.”

“What will I miss? Oh, many things, but cooperation and consensus for the greater
good of the university and students are near the top of my list,” he said.

“The students. Absolutely, the students,” Bruno said. “When I see the accomplishments
they make, in many cases overcoming significant obstacles, I am tremendously proud
of each one.

“ULM serves an area of the country mired in economic stress, a population that has
not had generations of educational and employment opportunities. Our students come
to ULM to rise above the disadvantages they were born into – and I don’t mean their
family situations necessarily. I mean being here in the Louisiana Delta. They chose
ULM as the institution that could give them the education they need to make the future
better for themselves, their families, and the community around them. Perhaps they
don’t realize it at the time, but it is a powerful choice. One that I am honored to
have been part of for these many years,” he said.

The Brunos are returning to his roots in Tangipahoa Parish near the town of Amite.
Their three children are grown; they have one grandson, Porter Joseph, who Bruno affectionately
calls “PoJo,” and a granddaughter on the way.

Life will be different under the moss-draped oaks of Louisiana’s Florida Parishes,
but not so far removed from the cypress trees lining Bayou DeSiard. Some morning,
Nick Bruno may look up and see a red-tailed hawk gliding overhead and think of the
time and the place when he was Warhawk No. 1.