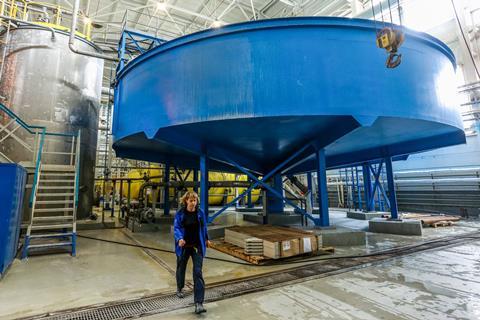 If you’re a curious child, there’s something fascinating about turning a light on and off and trying to figure out how it works. My electrical engineer father gave me loads of books about electricity, and from there I learned of Humphry Davy and Michael Faraday’s exploits with large voltaic piles of zinc and copper. In their laboratory at the Royal Institution, the voltaic piles provided the power for carbon arc lighting, one of the first examples of using electricity to do useful work. Davy also used the piles to isolate a number of elements, including potassium from potassium hydroxide. This demonstrated a key aspect of electricity and electrochemistry: producing useful chemical products.

Fast forward 200 years, and there are endless examples of electricity powering our world and helping us get work done. Our laboratories are lit by electric lights and electric motors help us keep our reactions stirring. Electricity also helps us make chemicals directly. Organic electrochemistry has had something of a renaissance in recent years, with Phil Baran of Scripps Research Institute in the US making efforts to popularise and standardise synthetic organic electrochemistry via the IKA Electrosyn apparatus. This unit offers the curious laboratory chemist the basics of electrochemistry, where the reaction mixture can be placed in a small vial and cyclic voltammetry experiments can be run with various standardised electrodes.

From ml to millions

Organic electrochemistry isn’t just done at 10ml scale, either. It’s done on pilot plant and commercial plant scale by chemical manufacturers like BASF. Many examples are as you would expect: benzylic oxidations to produce aromatic aldehydes, for example. Possibly the largest and the oldest example of industrial-scale electrochemistry is the dimerisation of acrylonitrile to manufacture adiponitrile. Over one million tons per year of this six-carbon molecule are produced and ultimately reduced by catalytic hydrogenation to hexamethylenediamine, which is a key component of nylon 6-6, an industrial polymer used applications from textiles to car parts.

At the heart of adiponitrile manufacture is the electrochemical reactor where two acrylonitrile molecules at a stainless steel cathode undergo radical anion formation; they then dimerise to form a single adiponitrile molecule. The reaction mixture is constantly recycled to isolate and reclaim the starting material. Note that this process doesn’t use any solvent – when you’re making hundreds of thousands of tons, you might consider running your reactions neat.

It’s not just organic electrochemistry that’s done industrially, either. Brine solutions are electrolysed to make bleach and caustic soda, and electrochemistry does the key work of the Hall–Héroult process to make aluminium, which is done on a scale nearly unimaginable to industrial chemists: 63.5 million tons of aluminium were manufactured in 2017.

To my organic chemist’s eye, what distinguishes that process is its scorching temperatures. The facility that I work at has a hot oil system that can reliably provide heat for our reactors at 200°C, and more if required. These sizzling temperatures can drive reactions to completion easily, but present an obvious handling hazard to our operators.

Our hot oil system is practically arctic in comparison with the temperature required to melt cryolite, the mineral that is used as a flux for electroreduction of alumina to aluminium. Early in university organic laboratories, you may have learned that melting points of mixtures are lower than pure compounds. In this case, a mixture of cryolite and alumina will melt at 900°C rather than the melting point of pure alumina at 2072°C or the melting point of pure cryolite at 1012°C. At this toasty temperature, a current passed into the electrochemical cell (called a pot) will reduce the alumina to elemental aluminium. The carbon anode is consumed, and is oxidised to emit carbon dioxide from the cell.

What is even more absurd about aluminium production is product isolation. Laboratory chemists know what to do when you have a product layer at the bottom of a reactor – you use a separatory funnel. In larger chemical reactors, there is a built-in drain hole at the bottom of the reactor. Such techniques stand no chance of success when the product is a molten liquid with a melting point of 660°C. Instead, in a procedure called tapping, a siphon is placed into the bottom layer of molten aluminium. The valuable product is then suctioned out using compressed air and a vacuum crucible.