TRIFED under Ministry of Tribal Affairs has taken a step towards adapting to the new normal by resuming the Aadi Mahotsav. The first Aadi Mahotsav post the pandemic is taking place between January 20-January 30, 2021 at GPRA Complex, New Moti Bagh, New Delhi.The 10-day festival that celebrates several aspects of tribal culture has evinced a lot of interest and has seen much footfall in the first place. The Aadi Mahotsav – A Celebration of the Spirit of Tribal Culture, Crafts, Cuisine and Commerce – has been a successful initiative that was commenced in 2017. The festival was an attempt to familiarise the people with the rich and diverse craft, culture of the tribal communities across the country, in one place. Due to the pandemic in 2020, the Aadi Mahotsav festival, which is an avenue for popularising tribal culture and arts, had to shift online. Focussing on the tribes of Madhya Pradesh and their crafts and traditions, the 10-day online event on tribesindia.com was a huge success. 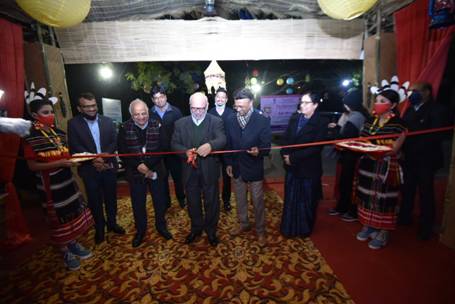 The currently ongoing Aadi Mahotsav is showcasing the tribal traditions, craft, arts and culture of tribes across the country and around100 tribal artisans and producers from across India are participating in this festival. In a way, this is a trial run for the mega Aadi Mahotsav that will take place at Dilli Haat in New Delhi from 1 to 15 February, 2021. Judging by the footfall on Day 1, it is clear that the ongoing mini-Aadi Mahotsav is receiving a good response. The visitors include important dignitaries and senior Government of India officials. These include Shri Bhaskar Khulbe, Advisor to the Prime Minister, Shri D.S. Mishra, Secretary, Ministry of Housing and Urban Affairs, Shri U.P. Singh, Secretary, Ministry of Jal Shakti and Shri Deepak Khandekar, Secretary, Ministry of Tribal Affairsamong other dignitaries.

Speaking at the venue, Shri Bhaskar Khulbe said, “I am very happy to get such an exposure to tribal culture, art and handicrafts from across the country, all in one place. This is indeed a great initiative by TRIFED, and will help in popularising tribal culture to larger audiences.” 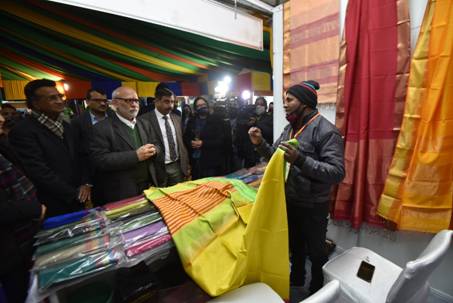 Shri Pravir Krishna, Managing Director, TRIFEDmentioned that despite the challenging circumstances of the past year which has affected the livelihood and income of the tribals, TRIFED has been carrying out several noteworthy initiatives that are aimed at improving the economic situation of tribal producers and artisans and making them self-reliant. The Aadi Mahotsav event will showcase the tribal traditions of the various tribal communities – by having their crafts and natural produce and cuisine on display. Thereby, exposing the vast urban audiences to the rich cultural heritage of the tribal population. Tribes constitute over 8% of our population however, they are among the disadvantaged sections of the society. An attitude that pervades among the mainstream is the erroneous belief that they have to be taught and helped. However the truth is otherwise – the tribals have a lot of teach urban India. Characterised by natural simplicity, their creations have a timeless appeal. The wide range of handicrafts which include hand-woven cotton, silk fabrics, wool, metal craft, terracotta, bead-work, all need to be preserved and promoted.

10TH ROUND OF TALKS BETWEEN GOVERNMENT AND FARMERS UNIONS HELD IN VIGYAN BHAWAN, NEW DELHI

MORE THAN OFFICE POLITICS: HOW TO SUCCESSFULLY READ AND NAVIGATE ORGANIZATIONAL CULTURE

UFV TO HOST PRESENTATION ON ENTREPRENEURIAL OPPORTUNITIES WITH PARTNERS IN INDIA

INDIA: INDIA’S FSSAI SETS LIMIT ON THE USE OF TRANS-FATS IN ALL FOOD PRODUCTS